In many ways Bhaskaracharya represents the peak of mathematical knowledge in the Kaliyuga’s 43rd century (i.e. 12th century A.D). Bhaskara, also known as Bhaskaracharya, meaning “Bhaskara, the teacher”, was born in A.D. 1114 in Vijayapura. Bhaskaracharya’s father was a Brahman named Mahesvara, who was himself a famed astrologer. This great mathematician and astrologer reached an understanding of the number Systems and solving equations, which was not to be achieved in Europe for several centuries. He had propounded The Law of Gravitation, in clear terms, 500 years before it was rediscovered by Newton. Bhaskaracharya became head of the astronomical observatory at Ujjain, the leading mathematical centre in India at that time. Outstanding mathematicians such as Barahamihira and Brahmagupta had worked there and built up a strong school of mathematical astronomy. He remained in Ujjain until his death in A.D. 1185. Six works by Bhaskaracharya are known which are: Lilavati (The Beautiful) which is on mathematics; Bijaganita (Seed Counting or Root Extraction) which is on algebra; the Siddhantasiromani which is in two parts, the first on mathematical astronomy with the second part on the sphere; the Vasanabhasya of Mitaksara which is Bhaskaracharya’s own commentary on the Siddhantasiromani ; the Karanakutuhala (Calculation of Astronomical Wonders) or Brahmatulya which is a simplified version of the Siddhantasiromani ; and the Vivarana which is a commentary on the Shishyadhividdhidatantra of Lalla. In 1207 an educational institution was set up to study Bhaskaracharya’s works. A medieval inscription in an Indian temple reads:- “Triumphant is the il e and the learned. A poet en a peacock…” Bhaskaracharya host l having capacity of 178 seats. 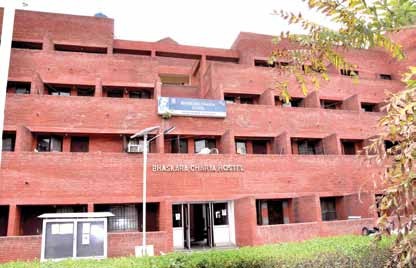